Haven't designed a logo in a while. This was fun: A martial arts gym for a friend located in Vancouver.
Posted by Jim Su - Artist, Publisher at 9:32 p.m. No comments:

The ReBot Gigabyte posters came in on Tuesday, and the first batch of orders were shipped on Wednesday! The poster turned out great! The paper stock was upgraded to 10pt cardstock which is about as thick as bristol board!

DMF Comics and I are creating a new business venture called PosterExclusives.com
We will be bringing `under the radar' licensed properties to the poster market. We are confident we can replicate the success of ReBoot posters.
Posted by Jim Su - Artist, Publisher at 11:36 a.m. No comments:

The bad news first:
I went to the printer last night to pick up the posters. They were printed on the wrong printer stock. We wanted the posters printed on cardstock. It was printed on 80lb paper instead. So the entire run has to be printed again. Our motto is Premium or go home.
The good news:
The print quality was amazing! ReBoot fans will LOVE this product! The metallic ReBoot logo is beautifull. Gigabyte looks really imposing at this blown up scale. Those who have ordered will have to wait a week longer to get their posters but trust me, the wait is well worth it.
Posted by Jim Su - Artist, Publisher at 8:53 a.m. No comments:

The Gigabyte Poster is now on sale at DMF Comics. Get it before christmas if you order NOW. It is limited to 500 and only $15. Bundle and save if you order both posters that I drew. For only $25 get both the original ReBoot Poster and the New Gigabyte Poster! You also pay only one fee in shipping.

Here is what the poster will look like.It features Rainmaker Entertainment's logo for the first time. The logos are printed in silver metallic ink! 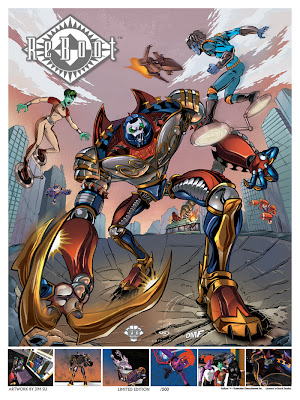 Just got a new license for a new poster. Still in the designing process so I will post a preview as soon as possible! And since it's already November, we will take pre-orders soon to try to get these posters to the fans before Christmas.

It's always good to have multiple points of sales for an indy comic book, so I'm pleased to announce that you can now buy the first three issues of Crozonia at DMFcomics.com!

Please support this unique online store - all the products carried are produced by DMF and Beach Studios. So order a copy of Silent Leaves or Demented while you order my books!

Here is a preview of Cover#4 for Crozonia! Let me know what you think! 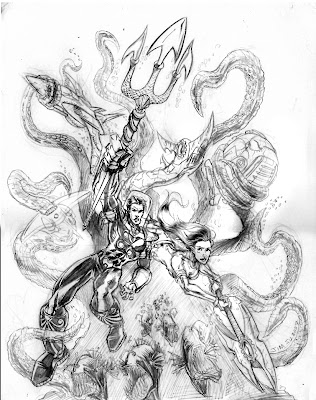 Finally available! You can order it online at my personal store. It will also be available through DMF Comics webstore soon so that you can purchase it with other fine DMF products.
Thanks for all your support!
Jim
Posted by Jim Su - Artist, Publisher at 7:57 p.m. No comments:

I had a great time at Fan Expo Canada, and so did my guest, Gavin Blair.
Sales wise, The Art of ReBoot did extremely well. We sold out of the artbook at the convention. Crozonia however, did not sell as well. Only about 150 book sold compared to over 250 at Fan Expo in 2006. There's a couple of factors attributed to that: being completely overshadowed by ReBoot, and the display we had did not put Crozonia at the forefront. I will be renewing my efforts to promote Crozonia, which I admit have been neglected due to the ReBoot project.

Crozonia Issue 3 did outsell Issue 1 and 2 which is promising. That means there are many return buyers who didn't mind the one year wait!
Posted by Jim Su - Artist, Publisher at 9:12 a.m. 2 comments:

For the few that visit my blog:
I am publishing a ReBoot : Plug - In Ashcan edition. What is this? It's 40 pages of extra ReBoot artwork from Brendan McCarthy, Studio B, Scott Lee and Dean Ormstrom. It's a shame these didn't end up in the Hardcover book. But while I still have the artbook license, I thought I would publish this severely limited run. It will debut at Fan Expo Canada as an extra surprise for all the loyal ReBoot fans in Toronto.
Posted by Jim Su - Artist, Publisher at 2:27 p.m. 1 comment: 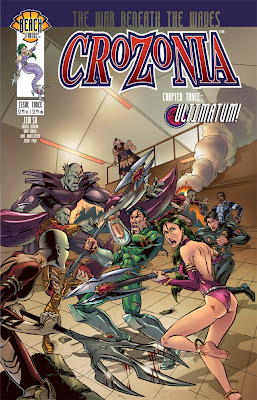 Haven't been blogging in a while. Since the last post, I exhibited at Comic-Con International in San Diego where I exhibited Crozonia for the first time. What an experience! Got to meet movie and television producers. Hopefully I can keep these contacts close when I exhibit next year and wrap up the series with Crozonia #4. Who knows what could happen?!!
You will have your first chance to pick up Issue 3 at Fan Expo Canada in Toronto (August 24-26), followed by The Word on The Street in Toronto. We are also bringing Gavin Blair (ReBoot Co-creator) to sign the ReBoot artbooks.
Posted by Jim Su - Artist, Publisher at 6:11 p.m. No comments:

Gary Cohen (Editor), John Montenegro (Colourist), Dan Rivera (Colourist), and I are hard at work on finishing the third issue. It's going to be a scorcher of a comic book. I will post the 2 covers soon. Unfortunately, I will not be attending Wizard World Chicago. So to the Crozonia fans from the mid-west, I extremely apologize. Issue 3 will be available to order online at DMF Comics.

I will be attending San Diego Comicon International and be a part of the Arcana booth. Crozonia hasn't been exhibited in the West Coast. Issue 3 will premiere at Fan Expo Canada.

Order The Art of ReBoot at comic book stores NOW!

The Art of ReBoot is almost out! But to ensure your local comic book store has one, PLEASE go there and tell them you want the book! Do it before April 14! Use this code: APR073377
Posted by Jim Su - Artist, Publisher at 8:21 p.m. No comments:

April is the month of ReBoot

The solicitation for the Art of ReBoot appears in the April edition of the Previews Catalogue. I will scan the page and the order number. The catalogue just came out today, which means we have from now until the end of April to raise as much awareness about the book and get comic book retailers to order it. If you are a fan, PLEASE spread the word. Better yet, go to your local comic book store and order a copy!

We have three upcoming shows to spread the word:
Arcana Studios is exhibiting at the Emerald City Comicon in Seattle on March 31 -April 1 2007 at Booth #406.
DMF Comics/Punch Brand is exhibiting at Sakura Con also in Seattle on April 6-8 at Booth# 130.
I will be a guest at the Toronto Comicon on April 13-15 in the Artist Alley.
Posted by Jim Su - Artist, Publisher at 9:59 p.m. No comments:

After The Wild, I worked on Firehouse Dog for Core Digital Pictures for 6 months. I rigged, modeled and animated the CGI stunt dog. During this time I also worked on Silent Hill. I had a great time working on these two movies because the experience was new. For the first six years of my CGI career, I had worked exclusively on CGI toons. Getting to work with live plates, doing tracking work was refreshing. It's one of the main reasons I decided to leave CORE in November to work on Resident Evil 3 for Mr. X.
Posted by Jim Su - Artist, Publisher at 7:45 p.m. No comments:

Admission is free! This is the first chance for Canadians to pick up the Art of ReBoot! Also, I will be displaying the cover to Crozonia Issue #3!
Posted by Jim Su - Artist, Publisher at 1:14 p.m. No comments:

I had more success at this year's New York Comic Con than last year, but the sales for Crozonia were still not as good compared to Chicago and Toronto. I'm not sure if it's because this show is a more corporate tradeshow like San Diego Comic Con, than the "flea market" sales bonanza that Chicago and Toronto are.
I sold about 80 Crozonia #1 and 80 Crozonia #2. A far lower total than Chicago or Toronto. Just like those shows, there were alot of people who came up to buy Issue 2 after buying the first issue last year! This is the real indicator that people enjoy my work! I would like to thank those people who bought the first issue and stuck around for issue 2. Thanks so much for the support. It makes a little indy artist like me feel big!
I also exhibited the Art of ReBoot, a Beach Studios co-production with Arcana and DMF. Altogether, we sold 82 copies of the artbook. That's a decent number considering the price point of $24. I was also able to sell around 20 ReBoot posters.
Posted by Jim Su - Artist, Publisher at 3:04 p.m. No comments:

The New York Comic Con is shaping up to be a HUGE event! Stan Lee and Steven King are guests of honour! I will be there at Artist Alley 147 selling Crozonia Issue 1 & 2, as well as premiering The Art of ReBoot! See you in New York!

The Art of ReBoot

The last few months have been really busy working on the Art of ReBoot. Sean O' Reilly from Arcana Studio scanned over 600 images, Jason Park from DMF Comics and I laid out and designed over 100 pages! This book will be a must-have on every ReBoot fan's list. It will be available at www.rebootart.com in late February 2007, and go into wider distribution over the summer. Jason designed the awesome website. Check it out and sign up on our mailing list!
Posted by Jim Su - Artist, Publisher at 8:16 a.m. 3 comments: