The Word on the Street happened this past Sunday. A great day (no rain) with great sales, saw familiar faces, and made some new contacts. This event marks the end of a very busy 2009 convention season!

Now I can focus on getting Crozonia finished, production on a new comic book based on an animation series, more Storm Hawks, and lot's of Bakugan artwork. I'll be laying low for the rest of the year, but be prepared for more great Beach CS products and news in 2010! 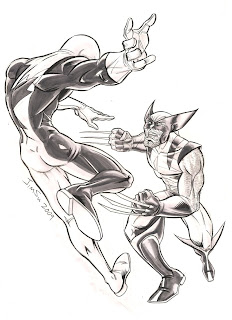 Here is a marker drawing I recently whipped up for the Joe Shuster Awards (University of Toronto Innis Hall, September 26th 2009)
http://joeshusterawards.com/
Posted by Jim Su - Artist, Publisher at 5:29 p.m. No comments:

Here is another movie that I worked on the past couple of years. Mr. X FX did a lot of the shots in this movie. Some of the shots in this trailer that I was responsible for include: the guy falling from the sky, and the last shot in the trailer of the guy being blown away.
Check it out Friday!

Whiteout Trailer from Distraktion on Vimeo.