Over the last few months, we have been providing package artwork for Bakugan, the leading CCG (Collectible Card Game) brand in the market today. Bakugan leads Pokemon, Yu-Gi-Oh!, Magic: The Gathering, World of Warcraft, and Chaotic. We have provided artwork in no less than 10 products in such a short span of time. We're looking forward to seeing those products on the market, and showcasing them on our site! Stay tuned.
Posted by Jim Su - Artist, Publisher at 9:13 a.m. No comments:

Crozonia is now out in the May Catalogue from Haven Distributors. 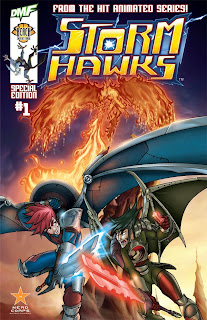 Here is the press release:
http://www.prlog.org/10232157-storm-hawks-comics-coming-this-summer.html
Posted by Jim Su - Artist, Publisher at 5:40 a.m. No comments:

We're going to press with the Storm Hawks Comic Book Special, and there are a host of creators that have contributed to this amazing body of work.

Look for it at www.stormhawkscomics.com, at conventions this summer, and finally in stores in September.
Posted by Jim Su - Artist, Publisher at 2:35 p.m. No comments: